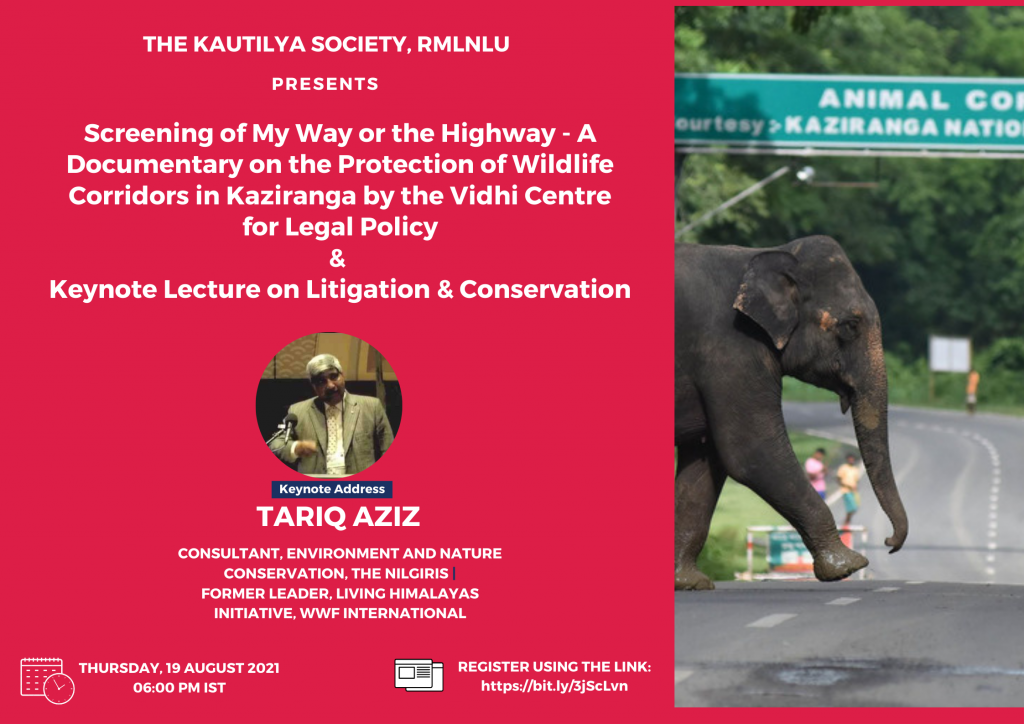 The Kautilya Society, RMLNLU, organised a screening of the documentary ‘My Way or the Highway’ on August 19 at 6 PM. The documentary, made by the Vidhi Centre for Legal Policy, looks into the judicial interventions for the protection of wildlife corridors in the Kaziranga-Karbi Anglong landscape in Assam which has been plagued by various ecologically unsustainable activities resulting in the destruction of wildlife habitats and obstruction to the movement of wildlife. It undertakes an on-ground investigation of the extent to which court orders have been implemented, reasons for successes and failures in implementation and the role of activists and various central and state government agencies. The screening was followed by a keynote lecture on ‘Litigation and Conservation: The Road Ahead’ by Mr Tariq Aziz.

Watch the full video of the event here.

The lecture discusses the 100-year-old history of Kaziranga National Park. Mr Aziz acknowledged the efforts of the forest department for their contribution in making the national park a success story. The park is home to the great one-horned Rhino, Tiger, Elephant, Wild Buffalo, Bara Singha and 35 mammals and many bird species. The park also has the highest density of tigers as well. The park holds global significance and has been recognised as a world heritage site.

Mr Aziz discussed the relocation of the One-Horned Rhino to Manas National Park and how the Brahmaputra and the change in the course of the river’s path have led to new challenges for the experts working in the area. They also discussed the issues that experts, activists and forest departments face when they have to deal with issues of mining and refineries which can affect the corridors and the biodiversity of the region.

Mr Tariq acknowledged the struggle that activists on the ground had initiated which led to the recognition of the Supreme Court and it helped them to get stay orders on developmental projects. They acknowledged the need for activism coupled with litigation as not only does it create a ground for conservation efforts but helps outreach and initiates discussion and discourse among the common populace which helps the conservation efforts.

Mr Aziz also emphasised how the new shift in conservation hinges on an ability to demonstrate commercial interests interlinked with species. They also believe that the way to overcome this hurdle is to work towards public interest litigations and creating legislations that take into account impact assessments and focus on more than just the commercial interest. Mr Aziz emphasised that initiatives such as the Vidhi Documentary are exemplary mediums of spreading the word and have a premium value. They also believe that for greater discourse, there needs to be initiation in regional languages for greater outreach.

The lecture saw healthy participation from students with intriguing questions being raised throughout the session and during the Q&A parked towards the end of the discussion.

Mr Tariq Aziz is an independent consultant and an expert in the field of environment and nature conservation in the Nilgiris, Tamil Nadu, India. Mr Aziz has been part of several significant projects in Kaziranga National Park. Additionally, he was the Leader of the Living Himalayas Global Initiative for the World Wildlife Fund, International.